Meet Malcolme Morgan, a Black Muslim father and son working for justice and liberation at Pillars of the Community.

“There is no justice or public safety in mass incarceration. It is the continuation of chattel slavery. I was aware of this long before reading The New Jim Crow. The issue was most poignant because it affected me personally.” 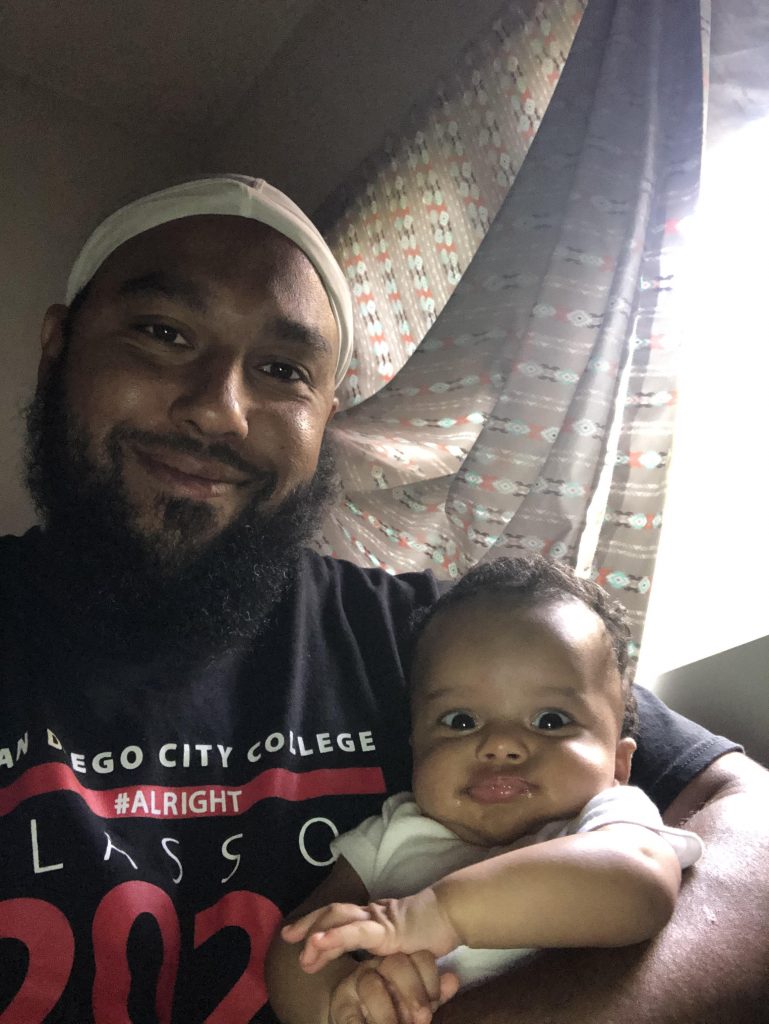 What role has the criminal justice system played in your life?

I’m striving for freedom–literal, financial, and mental. I served three years in prison for robbery and ten years for gun enhancement. I always felt I was overcharged, and then I started hearing all these stories in the reception yard about people getting charges that didn’t fit the crime–like thirty-five years to life for a little over a gram of meth.

“There is no justice or public safety in mass incarceration. It is the continuation of chattel slavery. I was aware of this long before reading The New Jim Crow. The issue was most poignant because it affected me personally.”

What role do you see the criminal justice system playing in the lives of Black communities in California?

Los Angeles was a hub for the War on Drugs, which was a war on poor people. This led to more policing, more incarceration, more prison building. California was the prototype for the prison industrial complex. I remember being an inmate and seeing corrections professionals from all over the country come to study the profitability of our prison. We made everything–we washed clothes, produced milk, and made cars. In my conversations with other systems-impacted folks, we talked about how unjust the criminal justice system has been for Black folks in California.

How has CA’s criminal justice system created barriers to Black folks accessing safety, democracy, and equity? Why is it important that our CA Citizens Redistricting Commission understands these barriers?

When I was on parole a few years ago, I wanted to vote. The fine print on the ballot read that if I’m on parole or probation, I can’t vote, and if I lie about it, it’s a criminal offense. I basically couldn’t participate in democracy. Like me, many of the folks I talk to were coerced into signing plea bargains–because it’s cheaper and more efficient for the courts–and that gives us strikes and puts us on databases that prevent us from accessing jobs, housing, and our right to vote. I recently tried to apply for an apartment for my sister who had lost her housing, but since I answered “yes” to the felony question on the application, they told me they wouldn’t even process my paperwork.

It’s important that this commission understands the legal and economic barriers people with convictions have faced and continue to face, and how that has left us with limited resources, access to opportunities, and actual representation in democracy.

What problems in the representation of Black communities in Congress or the state legislature have impeded criminal justice reform? And what has accelerated much-needed reforms?

The problems we face are multifaceted, so the plan of attack needs to be multi-pronged. We’re in this situation because of an unjust legal system and lack of economic opportunities.

“The commission needs to understand that when we are able to control who represents our communities, we can push our representatives to pass laws that can bring change and resources to our communities.”

We can pull our voices together and pass legislation that can release people back to their families and create conditions for us to access economic opportunities.

When California started building these prisons in small, rural, and often white towns, this created jobs, free labor, and incarcerated bodies that could be counted as part of some other community’s population. These areas could use the prison population to increase the census count and gain resources and representation. It’s important that the commission knows that reversing this decision is about undoing an injustice.

What are the unique opportunities for reforming CA’s criminal justice system in the state legislature or in Congress? Why is it important that our CA Citizens Redistricting Commission understands these opportunities?

I’m not pessimistic, but I am a realist. Many of these criminal justice reform bills are about dismantling laws that should have never existed in the first place. Because of people organizing on the ground, we have been able to accelerate that change. We have people who are putting in the groundwork–even from our prison cells–to mobilize our communities, but this work won’t actually work if the districts aren’t positioned to ensure our voices get heard.