Meet Pete White, a father and native Angeleno who lives this struggle every day, and a leader at Los Angeles Community Action Network (LA CAN). 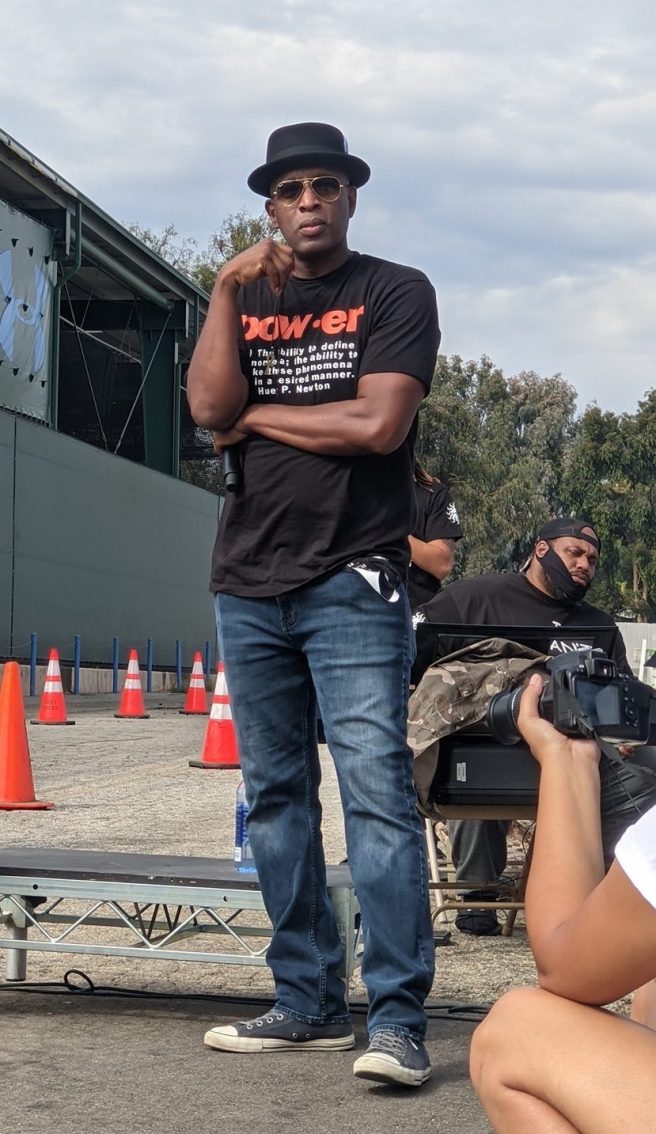 What has been your journey to housing and housing justice? What role do you see housing justice playing in the lives of Black communities in California?

I’m a native Angeleno. My family came in the 1940s fleeing lack of opportunity in Northern Louisiana, which was a very oppressive place for Black folks. My family was part of the early arrivals to California, landing around Central Avenue. During WWII, when the Japanese were sent to internment camps, some families, like mine, arrived in a place called Bronzeville, Los Angeles (now known as Little Tokyo).

Decades ago, I remember first seeing startling numbers of Black folks living on Skid Row. These were folks living in the streets and the shadows of these centers of power–multinational corporations, City Hall, Board of Supervisors. In 2016, Manuel Pastor (Director of the Equity Research Institute at USC) wrote a report called Roots & Raíces1 that looked at immigrants and where they’re going geographically. He also talked about Black folks and noticed that we were being erased across all zip codes. We were only gaining numbers in one zip code–Skid Row. So, we must reject the narrative that poverty and living on the streets is a byproduct of choice, mental illness, or substance abuse. Poverty is and has always been a product of the state’s political and economic decisions.

What policies and practices in your region have strengthened or diminished housing access, affordability, and justice?

Let’s talk first about the history that led us here. Black folks were legally banned from gathering wealth. We couldn’t get loans or fund our children’s education. Then, in the 80s, many safety net programs, like HUD, stopped investing in affordable housing, which had provided some semblance of economic stability for Black folks who maybe had to hustle with two or three jobs, but at least had housing.

These historical roots produce what we see today, the inability of many in our community to actually root down and have actual stability. The issues we see play out in the data were all raised during the COI listening sessions we held. Today, we have Black unemployment and rent rising, but wages staying stagnant. For those who have two or three jobs, the notion of owning your home is a stretch, and utterly unimaginable if you are unemployed. That’s undeniable if you do the math. The average fair rent for a two-bedroom apartment in Los Angeles is $2,600 a month. For this to be affordable, which means only ⅓ of your salary is going to rent, a family would need to be making about $95,000 a year. When you think about the cost of living in San Francisco, a family of four earning around $111,000 would be just breaking above the poverty level. Who has that kind of money?

What is the relationship between housing justice and Black erasure in CA? Why is it important that our CA Citizens Redistricting Commission understand this relationship?

The myth that poverty is driven by individual choices and circumstances has been a convenient ruse that allows policymakers to run away from their responsibility to ensure that folks have the opportunity to put down roots. This is the same opportunity–by the way–that propelled many white folks to homeownership and the middle class after WWII. This myth has led to a series of failed policy and political decisions that have been catastrophic to Black folks in California–including the War on Drugs and mass incarceration–as well as funding decisions. For instance, instead of fully funding the Affordable Housing Trust Fund, we have funded the police and carceral state.

During the racial uprisings in 2020, we saw all these signs calling for action on affordable housing. People see the relationship between anti-Blackness and housing justice. When the commission makes its decisions about maps, representation, and resources, I hope they consider the impact the pandemic has had on housing justice, and the social tsunami that is coming at us quickly when eviction moratoriums end and folks find themselves owing a year and a half of back rent. We have to make sure maps are drawn that bake in those realities and don’t aid Black erasure from California’s cities.

What problems in the representation of Black communities in Congress or the state legislature have impeded housing access, affordability, and justice in CA? How should these problems be addressed?

Congress and our state legislature have to be clear-eyed about the root cause of being unhoused, willing to step ahead of this tsunami, and bold enough to take on zoning policies that are actually racist tools designed to maintain segregation and keep poor folks and people of color out of certain communities. We need representatives who want to fight for inclusionary zoning, where developers have to consider and engage communities that reflect a range of income levels. This concept, which was raised in many of the conversations we held, reflects an appetite among Californians to have a more inclusive and just state.

What are the unique opportunities for creating more housing justice in CA? Why is it important that our CA Citizens Redistricting Commission understand these opportunities?

The housing justice movement is not a new movement. Folks impacted by this injustice have been organizing and building political power for decades. The movement has grown as more and more people find themselves priced out of housing in California. We’re hearing about white public school teachers living out of their cars because they can’t afford rent. If there was ever a time for a housing justice movement, it’s now.

“We are having conversations about affordable housing and redistricting in the height of gentrification. It is critically important that communities that are equally situated remain together.”

If we begin to carve maps that divide areas that have been working together to build political power, all the work building power will be lost.

How have Black leaders and communities in CA organized, advocated, and voted for strengthening housing access, affordability, and justice? How can redistricting set the stage for continued organizing, advocacy, and voting around housing justice?

I wrote an article with a friend called Breaking the Silence: Homelessness and Race, which illustrates how systems, not people, are broken. The three main reasons we are where we are today are because of deindustrialization (lost jobs due to outsourcing, technology, etc.), gentrification, and the War on Drugs dating back to the 1980s.

In the past 20 years, we forced certain data sets to be released publicly because we now know that cities and municipalities manufacture houselessness by their political and development decisions. In Los Angeles, 75-80% of unhoused people are Angelenos, and many are living on the streets in the communities where they used to be housed.

Redistricting will set the stage for the future of the housing justice movement. The maps drawn over the next few weeks by the CA Citizens Redistricting Committee will determine the voting path for representatives and ballot measures seeking to solve housing affordability, availability, and justice in our state.